What is Consciousness? (I)

Whatever consciousness is, it must have structure. Even emptiness can be defined only in contrast to abundance and nonduality versus duality (as the word says). Or it's just "Mu". And that would be the end of this paper - and everything else.

I suggest we allow ourselves some more time and try to start from a consciousness that is as concrete as possible, from a conscious object, say a glass of water. We perceive something that we distinguish from ourselves. We also differentiate it from its environment (table, cupboard, room) and determine it in relation to other known things (table, cup, plate) to what it "is". That is, we circumscribe its existence by comparisons. It is also being stabilized by external and internal interactions (pouring and drinking, molecular attraction and repulsion).

We can question these interactions ever more deeply and will never find a bottom. Biological processes, mechanical laws of motion and physical fields remain empty without a structure circumscribing them. That is to say, we can regard circumscription as a basic property of everything conscious and thus of consciousness.

Now, at the heart of every circumscription there results something hugely underrated so far: the central point. A single point relating directly to the whole. As for the water glass for example, it is the center of gravity and optical center or, if both differ, the center circumscribed by them, and so on. Because only the whole as such has a center. Through each division new centers (those of the splinters) arise and by each change (such as a bordering with handle) another one. Even if the change is symmetrical (without handle): Since the central point, like any other point, is nothing in itself and has meaning only in relation to a particular wholeness, another whole circumscribes another central point - also in the same "place" (here the center of a bordered glass). And even the point next to the center is the center of something else (say, a unit of glass and spoon).

Thus, there is a unique relationship between the infinitely small - infinitesimal - center and the circumscribing wholeness. To ignore the center point would be to ignore the whole thing. In the periphery (marginal zone), in turn, the external border is significant for the whole, in this way emphasizing its relation to the center point.

Of course, the relationship between us (the object of our self-consciousness) and the more external object is also i-structured. And when we dive into an object, we find there only different i-structures: trembling "particles", vibrating "fields", circumscribed "laws".

So, we have defined no less than the surface of consciousness. What we intuitively view as the "unity of the object" condenses symbolically around the center, that is, we perceive the unity stronger there, because at the center point it is closest to the wholeness. (Even in the empty glass: If a bit chips off, the center hardly changes and so we still have a glass.) "Parts" are perceived as more peripheral, where they also "crumble" more easily. Since consciousness is always in circumscribing motion condensing more or less static objects, I call it quasi-static.

Recommended Book:
Alternating Consciousness. From Perception to Infinities and Back to Free Will 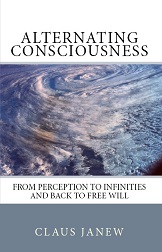 The purpose and mission of Scientific GOD Journal are to conduct scientific inquiries on the nature and origins of life, mind, physical laws and mathematics and their possible connections to a scientifically approachable transcendental ground of existence. This issue is entitled "Relationship between Consciousness & Reality" and contains the following Articles: (1) How Consciousness Creates Reality; (2) Relating the Relational-Matrix Model of Reality to Space-Time and Physical Reality; (3) The Quantum Illusion-like Nature of ‘Reality’ & the Buddhist Doctrine of ‘Two Levels of Reality’ Part I: Deconstructing Reality; (4) Stephen Hawking’s Hotchpotch; and (5) God of the Gaps.