If we weigh between two alternatives, say between job A and job B, then we weigh between their respective precedence. Each job has a certain probability of realization, which can change during the weighing, whereupon the probability of the other one adjusts immediately. That is, if we prefer job B, job A becomes less probable, but remains available in the background for a while. With job B we choose an individual probability hierarchy as such to our reality.


If we now decide for job B through and through, the others consequently choose job A or C in our reality. More or less consciously. Analogous applies to the others in their realities. There is no contradiction, for in every individual reality, from every perspective, it is a common choice. Even after I get job B, I can be aware of my alternative realities in job A or C, so that the individual realities intermesh, interact. It may therefore not be easy to come to terms with oneself through and through. But once this is achieved, the corresponding reality inevitably follows.

There is also no perspective in which everyone chooses job B through and through, because in the application situation the individual preliminary decisions of all applicants (and many others) for certain working conditions already converge: Only one can have the job, not everyone for an hour or all at the same time. And so an all-want-job-B-through-and-through-situation would contain an inner contradiction that urges resolution from the outset: through different choices of the applicants. Preferably "in time", but also shortly before the contract is signed. Please observe yourself in your job application situations: I bet you basically know beforehand wether you'll get the job - and actually agree (deep down, mostly). As notorious doubters, we just like to "play hardball" and get confirmation from the hiring manager. Nevertheless: The final decision of all parties involved may, if they want it, only be made at the last moment.

Strongly simplified because more descriptive we can perceive all individuals as "cones" of their probable changes: We all move together like spirits (or ghosts) at a certain distance from each other under a single fabric of probabilities that adapts to our shapes and movements. The fabric shows the "visible" interweaving of our options and decisions, and hints at even more potential underneath. We have to coordinate our decisions for one or the other direction of movement at least roughly with those of all other spirits, so that we don't warp the fabric too much or get entangled in it. The priorities and thus the probability shapes adapt to each other until they predominantly harmonize.

The probability of developments as a fifth dimension besides space and time lets us not only see in black and white, but lets us acknowledge manifold alternatives in the background, which surround us like waves. This in turn leads to a more conscious cooperation with others and an expanded awareness of our possibilities. 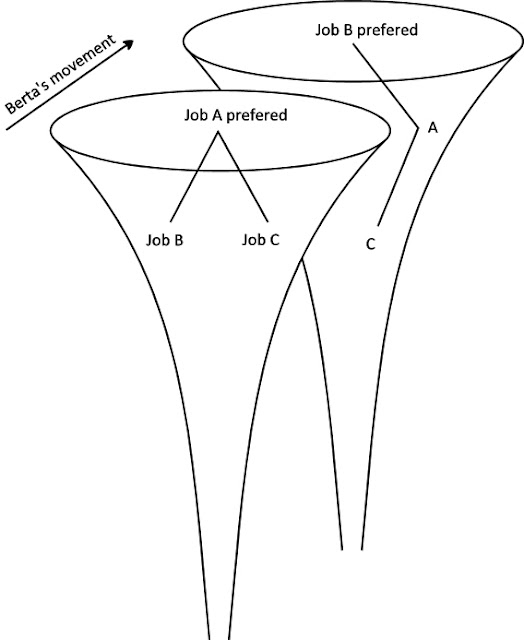 Figure 3: As Berta changes her mind from Job A to Job B, which suits her better, her perceived alternatives reshuffle in the probability hierarchy. 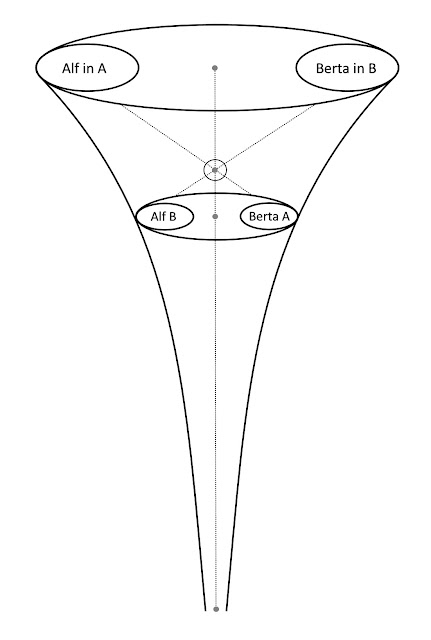 Figure 4: Berta's awareness is in a joint decision-making and attuning process with that of her rival Alf. If she prefers Job B, he has to choose Job A. Both are aware of their alternative existences in the respective other Job and also of their alternative rival. They form their own as well as a collective probability hierarchy, which together from the conscious to the subconscious decide on a priority new overall structure - for example, the one in which Berta has Job B and Alf has Job A. The alternative overall structure drops down just like Berta's "single" alternatives in Figure 3.

This text is an excerpt from the book
Alternating Consciousness. From Perception to Infinities and Back to Free Will

The question of whether we can freely choose between several possibilities without imagining this freedom or confusing it with chance leads...

Consciousness and Free Will Briefly Explained

For getting better translations use DeepL (see link above).

Experiment: All references to infinities have been omitted: