On the four quadrants (perspectives) of consciousness by Ken Wilber

Ken Wilber's system of four quadrants is a workable concept to put worldviews in an order, I think. Anyway, the reduction from second person to first person plural ignores the essential quality of a dialogue: When I say "you", I do not mean "we", and I also do not mean "I" or "he". These are mere aspects of the "you". The main point is the change of perspective as such, that creates the dialogue, the perception of another individual as itself and so the second-person view. I change my viewpoint to the viewpoint of the other (partly at least) and come back to a new own one and so forth.

Because this change underlies all the other quadrant views (you are only "he", when I am mainly I), it could be the quadrant in the middle or the big one beneath/encompassing the other ones.

Another problem I see in considering all quadrants equally. Who perceives the four quadrants and changes between them? Since consciousness is omnipresent, as Wilber states by himself elsewhere, the first-person view should be at the top, followed by the other three views being special aspects of the dynamic "I" (of the individual focus, the universal subjectivity). So the individual becomes a dynamic hierarchy culminating in the center of "I". It is from this perspective only, that "others" and collectives are possible in the last consequence.

The above hierarchy may be illustrated by this picture: 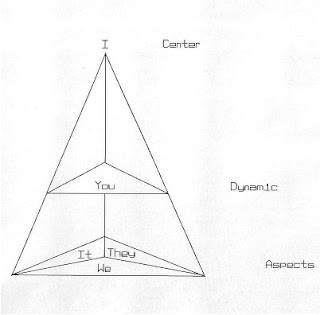 Meanwhile Ken Wilber has published a different explanation (consistent within its own framework) which presupposes – as most scientific concepts do – that we can't access another You completely. They say we can only approach it from its outside, from our own I.  But how then do we know that there is anything to be "approached" at all? Strictly speaking, we can't. So, all these concepts lack deeper consistency.